Juan Williams is a secular globalist. People like him don't care about our military - they want them to shut up and go die in foreign wars on behalf of the globalist oligarchs.

During Fox News “The Five” Jesse Watters cornered his liberal co-host liberal Juan Williams over the West Point Cadets accused of flashing the “OKAY”  sign at the Army-Navy game. 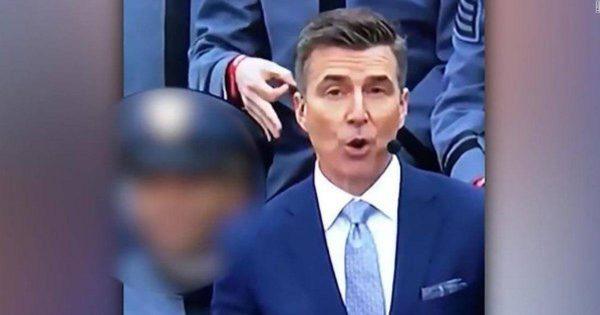 The two got into a firey exchange on Friday when Watters demanded that Williams apologize for accusing the cadets of being “white supremacists” after some of them were caught on camera flashing the “okay” symbol at last week’s Army-Navy football game.

By the way, the “okay” symbol is NOT “racist.” This is some weird conspiracy theory that liberals cooked up – and just because they say its so, doesn’t make it so.

“I said that’s a dangerous symbol at a time when white supremacy is on the move in this country,” Williams said, defending his position after co-host Dana Perino reported on the latest in the incident in which a military investigation was launched into the cadets flashing the “okay” symbol during the game.

Accused of using the symbol conveying so-called “white power,”  the cadets, it was determined, were just playing the common “circle game.”

“Last Saturday we had reason to believe these actions were an innocent game and not linked to extremism, but we must take allegations such as these very seriously,” West Point’s superintendent said in a news release. “We are disappointed by the immature behavior of the cadets.”

The university noted that, while they were cleared of any racist intent, the cadets will face “appropriate administrative and/or disciplinary actions.”

Williams continued to press his point about the use of the symbol as Watters explained the “circle game.”

“It’s when you put it down there and someone sees it, you get to punch them in the arm,” he said. “I explained that to Juan, Juan accused them of being white supremacists, so I would like Juan to apologize for accusing the cadets of using a white power symbol.”

“Let me tell you something,” Williams interjected.

“That doesn’t sound like an apology,” Waters responded. [Bizpacreview]

Of course, Juan Williams never did apologize and got rude and nasty with Watters. Typical liberals.

You can watch the video below:

The fake news media and progressive globalists learned nothing from the Covington Boys disaster. They still jump the gun and report false facts and trash people’s reputations without batting an eyelash.

Because these secular globalists have no faith and no national loyalty whatsoever. These people don’t care about our military – they want them to shut up and go die in foreign wars on behalf of the globalist oligarchs.

This piece originally appeared on WayneDupree.com and is used by permission.