Rosie O’Donnell, the comedian who has a longstanding feud with Donald Trump, spoke out on Thursday night to defend impeachment witness Pamela Karlan for making a joke about the president’s 13 year-old son Barron during a congressional hearing the day before.

“The Constitution says there can be no titles of nobility, so while the president can name his son Barron, he can’t make him a baron,” said Karlan, a professor at Stanford Law.

TMZ asked O’Donnell if she thought that Karlan’s comment about Barron was uncalled for, and the comedian held nothing back with her response.

“No, she was making a point and they took it out of context,” O’Donnell replied. “I don’t think she did anything wrong by saying that. She was trying to say that he’s not a king, he can have a child named Baron but he cannot make a baron.”

“So there was no need for her to apologize?” the TMZ reporter asked.

“No but she did which was nice of her, that was her decision to do, to make,” O’Donnell responded. “But I thought she was phenomenal at the hearings. As a woman, the women who have been testifying have been absolutely astonishing and I haven’t missed one.”

O’Donnell went on to say that our “democracy itself is at stake” before she shifted to bashing President Trump himself.

“He’s a terrible terrible human,” she said of Trump. “He’s a cruel man. He’s unkind and he’s a liar, and he’s hurting our nation and the world.”

This is not the first time that O’Donnell has mentioned Barron. Back in 2016, when Barron was still only 10 years-old, O’Donnell tweeted out a conspiracy video that falsely claimed that the young boy was autistic.

“Barron Trump autistic?” O’Donnell wrote alongside the video. “If so, what an amazing opportunity to bring attention to the autism epidemic.”

After receiving tons of backlash for this, O’Donnell posted an apology to First Lady Melania Trump.

“I apologize to Melania Trump, I was insensitive in my RT [retweet],” she wrote. “I am sorry for the pain I caused, it was not my intent, I am truly sorry.” 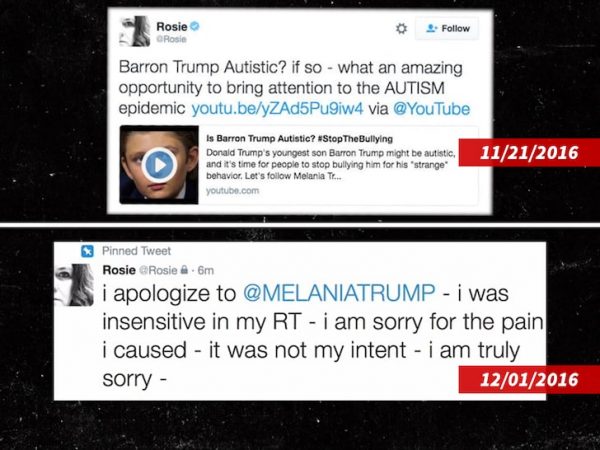 O’Donnell and Trump have been in a longstanding feud for over a decade, and while he has mostly left her alone since taking office, she has only stepped up her attacks on him since he became president. She regularly calls for Trump’s impeachment on Twitter, even going so far at times as to call for his imprisonment.