“Why is an outlet with such close ties to Communist China allowed in the White House briefing room?”

A reporter with ties to China’s state-owned media gained access to Monday’s White House coronavirus press briefing and appeared to use the opportunity to promote China.

The reporter, who works for Phoenix TV, based in Hong Kong, was called on by President Trump, at which point she said “Only last week, there were multiple flights coming from China full of medical supplies. Companies like Huawei and Alibaba have been donating to the United States, like 1.5 million N95 masks and also a lot of medical gloves, and much more medical supplies.”

After an awkward pause, Trump replied, “Sounds like a statement more than a question.”

The Chinese reporter than asked the president if he was willing to work with Beijing, at which point Trump said he was hoping China would honor its trade deals with America.

She then replied, “Are you cooperating with China?”

“Who owns that? China?” Trump responded.

She replied, “It’s based in Hong Kong. … It’s a privately owned company.”

However, in 2018, an FCC investigation discovered that Phoenix TV is controlled by China’s Communist Propaganda Department, and part of it’s directive is to report negatively on the United States.

The Hoover Institution has also investigated Phoenix TV and has labeled it a “quasi-official” broadcaster with “links to the PRC’s Ministry of State Security.” 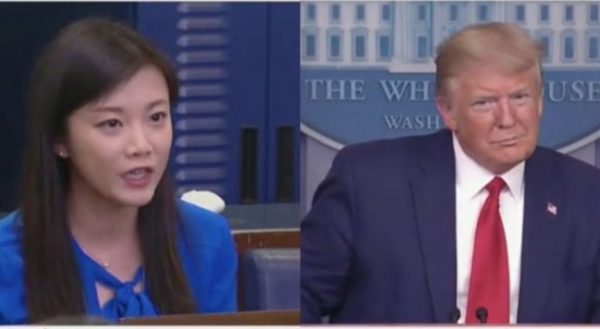 Phoenix TV has been aggressively expanding in the United States and Mexico.

Sen. Ted Cruz of Texas immediately took to Twitter, writing “WH Correspondents Assoc gave a seat at the WH press briefing to an employee of the Chinese Communist govt, to ask globally televised Qs to POTUS, at the same time China is waging a propaganda campaign to hide their culpability & coverup of the Wuhan virus?!?”

Congressman Paul Gosar of Arizona asked “Why is an outlet with such close ties to Communist China allowed in the White House briefing room?”

Republicans also complained that the White House Correspondents Association removed the press pass of a reporter working for the conservative network OANN, allegedly for standing too close to another reporter during the COVID-19 pandemic.

Several Republican lawmakers said on Monday that if China is spreading propaganda in the White House, immediate action must be taken, especially given Democrats’ concerns about foreign interference in American politics.