WYOMING – Republican Rep. Liz Cheney is reportedly getting desperate in the wake of her fall from grace within her own party, with the congresswoman apparently mailing campaign brochures to registered Democrats asking them to switch political parties [1] to vote for her in the upcoming primary.

It’s hardly news that Rep. Liz Cheney’s polling numbers are abysmal, with Politico [2] having reported this past May that she was “down 30 points in a new survey of her August primary.”

The Wyoming congresswoman essentially upended her political career within the Republican party ever since she decided to vote to impeach former President Trump over the incident at the Capitol.

Furthermore, her becoming one of the centerstage figures affiliated with the January 6 committee all but guaranteed the demise of her status [3] within the Republican party, with NBC News noting the “national platform and crusade of hers is contributing to Cheney’s undoing with GOP voters at home in Wyoming.”

Obviously, these alienating realities are not ideal for someone who needs to rely on the votes from registered Republicans in the upcoming August primary – but Rep. Cheney seems to have devised a strategy to address this, albeit, one unlikely to prevail as well as controversial.

Campaign flyers for Rep. Cheney reportedly began showing up in the mailboxes of registered Democrats within Wyoming, giving instructions on how to change one’s political party over to Republican so as to participate in the primary and vote for Cheney as the party candidate.

Apparently, the Sheridan County Democrats were not amused with this tactic of Cheney’s, taking to Twitter earlier in June once they caught wind of the flyers going about.

“Cheney sent a mailer out blatantly asking folks to switch parties for the primary. Whatever you think about the 1/6 committee, remember THEY made the party what it is. THEY made Trump possible. We have 3 very different Dems vying for the House. Vote in OUR primary, not theirs.” 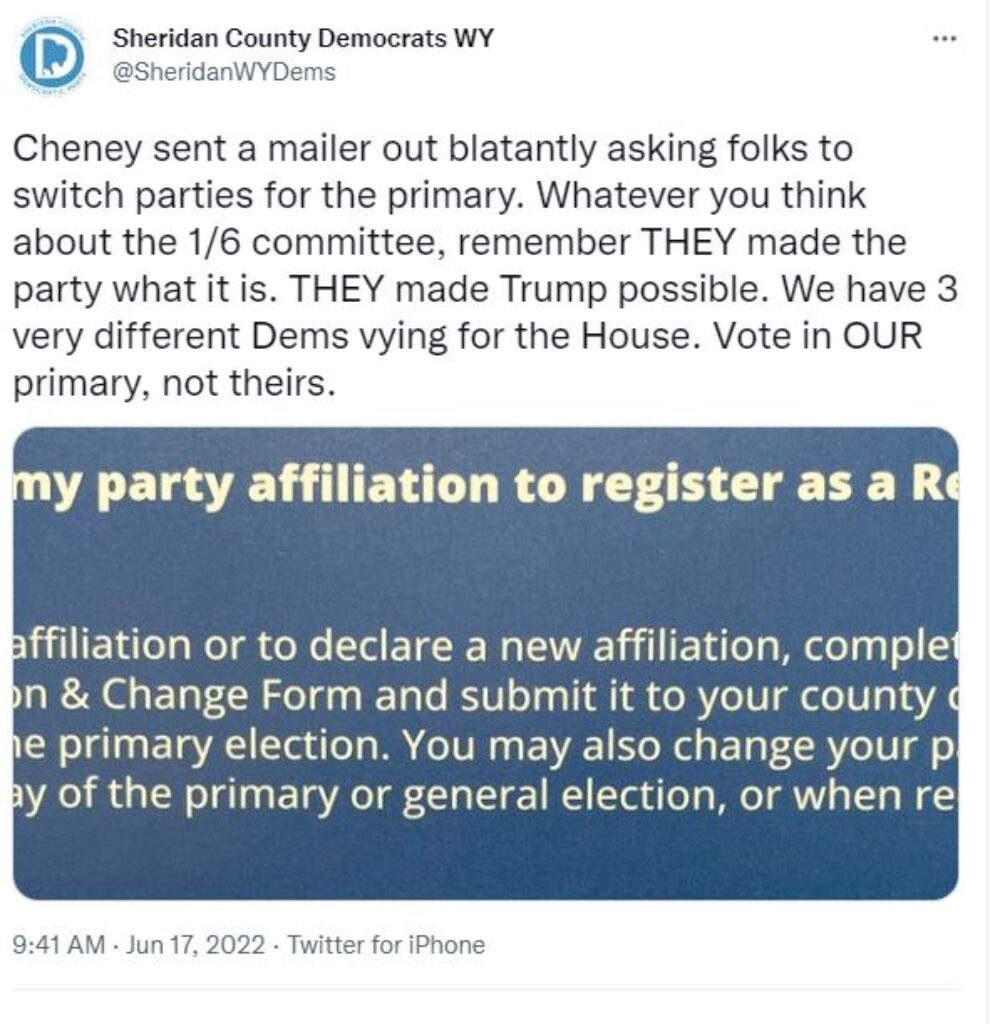 While the tactic, sometimes referred to as “party raiding” or “crossover voting,” is generally legal, it is still considered to be controversial.

In fact, the matter wound up going before the Supreme Court back in 1973 with Rosario v. Rockefeller [4], where voters challenged a New York law that required them to enroll in the party of their choice at least 30 days before a general election in order to vote in the following party primary.

The Supreme Court in that case upheld New York’s law, finding that it didn’t deprive anyone’s ability to vote in general elections and served a legitimate purpose in avoiding nefarious party raiding.

But what is telling in Rep. Cheney’s exploits to try and attract Democrats to engage in party raiding proves that she’s quite aware that she cannot win the primary via appealing to legitimate Republicans.