“Lock Him Up”: Trump and Melania Booed by Entire Stadium at World Series Game

When President Trump and First Lady Melania Trump arrived at last night’s World Series game in DC, featuring the Houston Astros and the Washington Nationals, they weren’t expecting such a frosty greeting. The couple was greeted by boos from almost the entire stadium.

Some people in the crowd chanted, “Lock him up!” while others shouted, “Impeach him!”

Trump and Melania sat in a lower-tier box to the left of home plate. While their arrival wasn’t formally announced, fan in the section below Trump saw him as he sat down. Some smiled and gave him a thumbs-up–but by the third inning, the rest of the park saw he was there and they weren’t happy.

Almost immediately, as the crowd caught on to the fact that the president and Melania were there, they began heckling the pair.

Trump getting booed and enduring chants of “Lock Him Up” at the World Series is exactly the kind of content my heart desires.

Footage captured by NBC moments after the stadium announcer called out his name documented Trump’s beaming smile drop sharply to a grimace when he first heard the boos ring out. Trump then appeared to shake off the hostile reception, reclaiming his smile and waving enthusiastically to the crowd.

But the taunts continued throughout the game, with two fans behind the home plate unfurling signs that read ‘VETERANS FOR IMPEACHMENT’ at one stage.

It isn’t initially clear if Trump, who left the game around 10pm, saw the banner on the stadium’s display board before making his exit.

Until Sunday night, Trump had yet to attend a major league game as president even though the White House is a few miles northwest of Nationals Park. He’s been known in the past to support both the New York Yankees and the Mets. [Daily Mail] 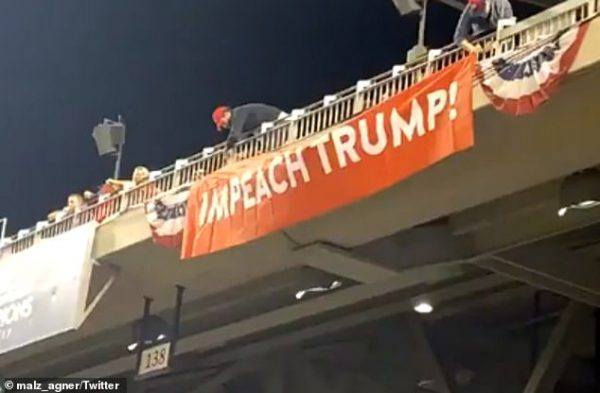 The players were a bit more forgiving. Nationals star pitcher Stephen Strasburg said before the game, “I think everybody is excited. It’s the president of the United States. So there’s obviously beefed-up security. So usually the dogs that are sniffing in our clubhouse are these nice Labs that are super friendly. And today there was a German shepherd that I didn’t really feel comfortable petting.”

Nationals manager Dave Martinez said, “He’s coming to the game. He’s a fan. Hopefully he cheers for the Washington Nationals, and I hope he enjoys the game.”

Business Owner Cries After Protesters Destroyed His Sports Bar — He Sunk His Life Savings Into it, No Way to Rebuild