Hardly "The Golden State" any more.

According to a report from Fox Business, many residents in California are fleeing the state as U-Haul reports that they have run out of trucks. It appears the top choice for Californians to move to is Texas. Illinois is also losing residents to southern states that offer residents the ability to live their lives without unconstitutional restrictions put in place by state and local governments.

“California and Illinois ranked as the states with the greatest one-way net loss of U-Haul trucks, and most of that traffic appears to have gone to Texas and Florida. So many Californians are leaving the once Golden State that the moving giant says it ran out of wheels for them to rent” – Fox Business.

Texas was one of the top states to move to before the pandemic in 2016 and 2018, but it dropped below Florida in 2019 and fell below Tennessee the following year. However, people are now moving to Texas quickly to escape areas where their freedoms have been taken from them.

“Texas’s growth is statewide, although some of its biggest gains occurred in the suburbs around the DFW Metroplex. Florida’s gains are equally widespread, with considerable growth south of Orlando and along both coastlines. Overall moving traffic across Texas increased in 2021, as it did in most states. Arrivals of one-way U-Haul trucks jumped 19%, while departures rose 18% over 2020. Arrivals made up 50.2% of all one-way U-Haul traffic last year in Texas.” – U-Haul Press Release

“The Texas economy is growing fast. With a strong job market and low cost of living, it’s a no-brainer. Texas doesn’t have an income tax, so families get more for their money.” – Kristina Ramos, U-Haul Company of South Austin president

Blue states are losing residents to Red states as individuals get fed up with mask mandates, jab mandates, and lockdown measures that are keeping them from being able to live their lives.

“Newly released data from the United States Census Bureau reveals that while blue states like California and New York have increasingly lost population from July 2020 to July 2021, red states such as Texas and Florida have seen population increases,” – Breitbart News Article December 23 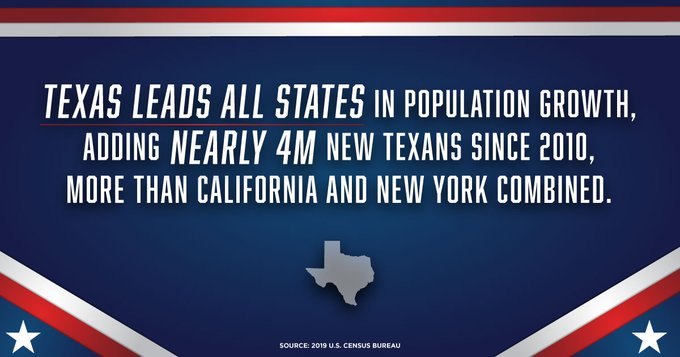 “More people are choosing Texas because it is the best state to live, work, & raise a family,” – Texas Governor Greg Abbott.

This piece was written by Zach Heilman on January 9, 2022. It originally appeared in RedVoiceMedia.com and is used by permission.

Schumer To Use Nuke Option Against Filibuster