Oil prices soared higher this morning once rumors were floated that the Biden administrations was about to ban imports of Russian oil in the United States. Hours later, President Joe Biden made a formal announcement from the White House confirming the ban, and oil prices jumped even higher.

The ban includes Russian oil, liquefied natural gas, and even coal, according to a Bloomberg news report . 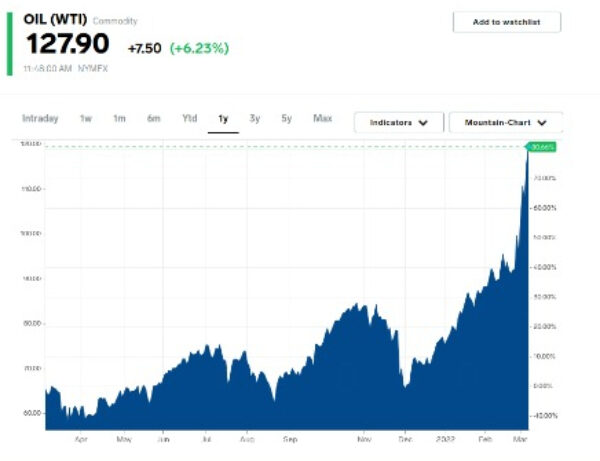 President Joe Biden announced that although the U.S. will ban imports of Russian energy, our European allies and partners will not. Europe is very dependent on Russian oil and natural gas.

Speaking from the White House, Biden said “the United States is targeting the main artery of Russia’s economy” and “the American people will deal another powerful blow to Putin’s war machine.”

Oil prices have been on the rise for over a year now. The stocks of oil companies have been soaring along with the price of crude.

The national average price for regular gasoline has now reached a record high of $4.17 per gallon, and analysts predict higher prices ahead.

And now, Biden’s Press Secretary, Jen Psaki, is telling reporters that higher prices are due to the Ukraine war. Watch her point the finger at Putin for higher oil prices here.

Meanwhile, the Biden Administration has halted all new drilling on federal land, and has shut down the important Keystone Pipeline.