Elon Musk Is ‘Out For Blood’ – Goes After Hillary Clinton

This is going to be a Hell of a fight.

Elon Musk recently claimed that he’s “out for blood” after agreeing with and replying to a Twitter thread started by Republican Rep. Jim Jordan, who delivered a four-sentence breakdown of the Russia hoax propagated by the Clinton campaign in 2016.

On May 16th, Rep. Jim Jordan delivered arguably one of the easiest-to-digest breakdowns of the corruption that plagued the 2016 election cycle, which all goes back to Clinton’s efforts to push propaganda to malign then-candidate Trump.

“Christopher Steele created the dossier. Glenn Simpson sold it to the press. Michael Sussman took it to the FBI. And Democrats and the media lied to you about it all.” As we reported here earlier in May, an FBI special agent had testified at the Michael Sussmann trial that he and his supervisor had come to the conclusion within 24 hours of receiving the Alfa Bank allegations that the alleged Trump/Russia secret communication channel was bogus.

During the May 17th testimony, FBI Supervisory Special Agent Scott Hellman stated the allegations handed over to the FBI by Sussmann in September of 2016 were debunked within a day at his office and even “[Chicago’s FBI office] had looked at the data further and they agreed with our assessment…that there was no secret communications channel between the Trump Organization and Russia.”

Four days after Rep. Jordan tweeted the quick synopsis of the Russia hoax, Musk responded on May 20th agreeing with the Republican congressman while sharing a BBC article detailing Sussmann’s lies to the FBI to help sway the 2016 election.

“All true. Bet most people still don’t know that a Clinton campaign lawyer, using campaign funds, created an elaborate hoax about Trump and Russia. Makes you wonder what else is fake.” 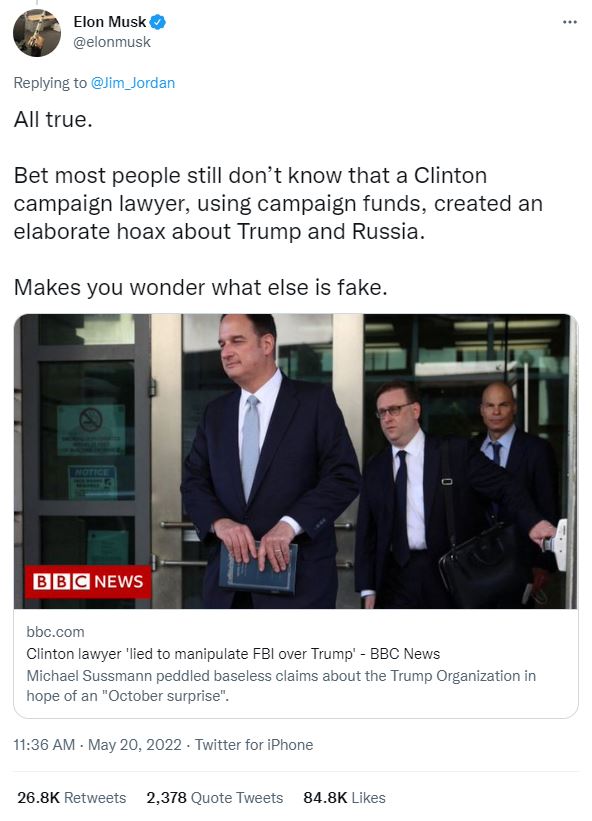 To this day, Hillary Clinton still has the Twitter post from October 31st of 2016 – weeks after the FBI already knew the Alfa Bank claims were bunk – promoting the 2016 Big Lie about Trump and Russia having a secret communication channel.

In her October 2016 post, Clinton wrote, “Computer scientists have apparently uncovered a covert server linking the Trump Organization to a Russian-based bank,” which now years later, investigators uncovered that her campaign was the source of this entire debunked conspiracy. 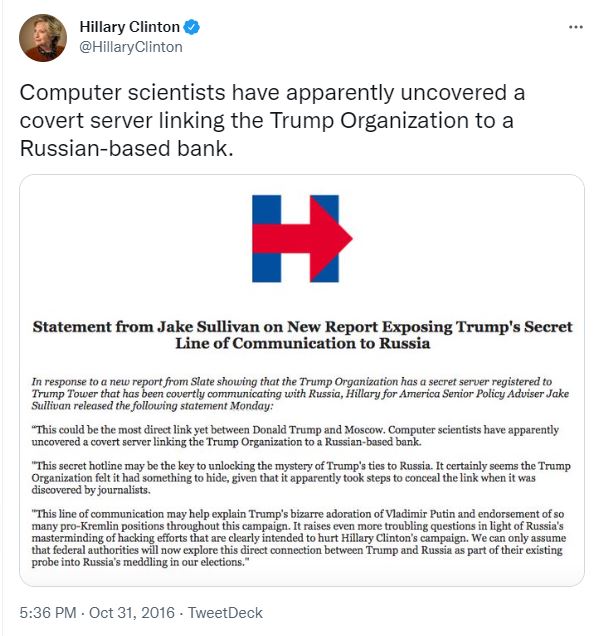 Going back to the May 20th post from Musk where he signaled his understanding of Clinton being behind the 2016 Big Lie, one Twitter user responded to him writing, “Elon out for blood now. Love to see it.” In response, the SpaceX CEO wrote, “I am indeed out for blood.”

Musk has revealed that as a moderate, he’s historically voted Democrat but is having a change of heart amidst the vitriol from the left targeting him, stating “I might never have voted Republican, just to be clear. Now this election, I will.”